From Carbon Neutral to Nature Positive

Why is nature an opportunity for the economy? Read on UBP's recommendations on the topics. 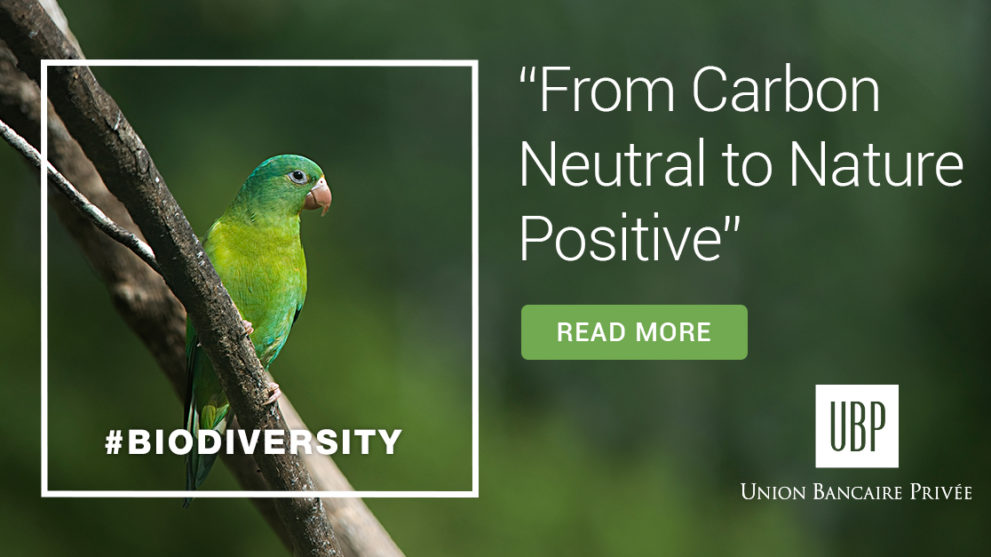 As sustainable investing has gathered momentum over the last decade, much of the focus of the underlying investments has been on climate stability and, more specifically, carbon intensity. This makes sense: direct carbon emissions are relatively easy to measure and therefore, in many cases when corporates have begun non-financial reporting, it’s the first data point they produce. Capital allocators can clearly see the move towards an economy powered by renewable energy and so investment products have been developed to meet this demand. This shift has been supported by tightening regulations on emissions and disclosure, and, of course, an overarching commitment from the Paris Agreement to limit global warming to under 2°C.

The cumulative impact of this on corporate behaviour is significant. In the last five years, the number of companies committing to science-based emissions targets has grown from under 100 to over 1,000, with a combined market capitalisation of over USD 20 trillion – this is roughly 20% of global market capitalisation and includes some of the highest-emitting sectors. There’s a long way to go, but we’re at a tipping point for adopting ambitious emissions targets in both the public and private sectors.

The same drive, the same commitment must now be extended to nature. We are convinced of the merits of a carbon-neutral economy; it is essential that we also create a nature-positive economy. In fact, the two are inextricably linked:

• Nature – forests, oceans and coastal regions – provide huge carbon sinks, absorbing up to 40% of all carbon emissions.
• The erosion of biodiversity is also a big contributor to climate change, with food and agriculture broadly accounting for ¼ of global emissions.

This mutualistic relationship means it makes no sense for us as investors to aim to solve one aspect and ignore the other, particularly when a restoration of biodiversity brings such significant investment opportunities.

The size of the investment opportunity relies on three factors: consumer demand, top-down regulation, and innovation. It is evident that consumer interest in this topic is high and increasing. In the 2020 Union for Ethical BioTrade (UEBT) Biodiversity Barometer report, over 80% of respondents believe that companies have a moral obligation to make a positive impact on biodiversity.

The further good news is that key decision-makers are also aware of the biodiversity problem. There is a noticeable increase in recognition that a similar approach to the Paris Agreement is needed for nature. With this awareness comes policy-setting, regulation and capital expenditure. This involves an increased cost of doing business for some; for others – those who are helping to solve the problem – this potentially creates a multi-decade opportunity for superior growth and success as capital flows towards the “fixers” of the biodiversity crisis.

These “fixer” businesses can vary hugely, but they typically have one thing in common: innovation. This is what bridges the gap between the desire for change and the achievement of it. Examples of these disruptive fixers include companies delivering planet-friendly farming practices, a circular economy, and those enabling urban spaces to be supportive of nature. As Figure 1 shows, these innovators have become mainstream and accessible to investors in listed markets. The combined market capitalisation of the plant-based protein sector is now over USD 17 billion and this is a sector which didn’t exist in listed markets five years ago. Given 65% people are considering eating less meat and 1 in 4 have already cut down, this is just one example of how investing in favour of nature instead of against it has the potential to keep delivering both financial and non-financial returns.